Today’s post looks again at DC super-heroes introduced in the month of July. 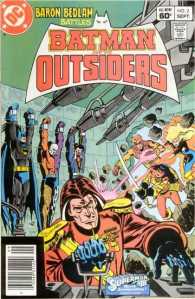 Geo-Force, Halo and Katana: In the early 80s, thanks to the success of X-Men, Legion of Super-Heroes and New Teen Titans, DC revamped Jim Aparo’s long-running Brave and the Bold as a vehicle for a Batman team. Batman and the Outsiders had a less cosmic scope (at first)  and a very “Marvel” tone. Alongside Bronze age cult favourites Metamorpho and Black Lightning, Aparo and Mike W. Barr introduced three new characters.

Geo-Force has one of the most unwieldy super-hero names in DC history. His claim to fame was being half-brother to legendary NTT traitor Terra. As the hereditary ruler of a Ruritanian country, Brion was reminiscent of both  Namor and Dr. Doom. When Alan Davis took over BATO, however, Geo-Force was played like Captain Britain: a muscle-bound buffoon and romantic bumbler. Perhaps when Brad Meltzer dropped him into the JLA, almost as an afterthought, Brion should have been portrayed as a comedic character. God knows they could have used one. For my part, I thought he wore Orion‘s 70s outfit better than Darkseid Junior, especially the earth-coloured version.

The naive and sweet Halo was a slightly saccharine take on Kitty Pryde. She turned out to be a dead petty criminal possessed by an alien entity. Comics! John Byrne later depicted Gabrielle in an angelic white costume.  The mother-daughter relationship of  Storm and Kitty was reflected in Halo’s relationship with the diminutive Katana. This tiny Japanese hellion was, in turn, inspired by Frank Miller’s work on Daredevil and Wolverine, as well as the Manga that were being introduced to US and UK readers.

Despite the deliberate cheesiness of the storylines and the out-of–fashion art, BATO still has a tenuous grip on readers’ imaginations. The modern Katana can be seen in Birds of Prey and soon in the new Batman animated series; Halo has cameos in Batman Inc. 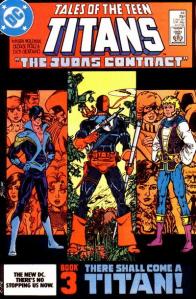 Nightwing and Jericho: As I said, in the early 80s,  Wolfman and Perez were hugely successful with their overwrought and melodramatic super-soap. The appeal of an adult Robin had been evident since the campy début of the Earth-2 version in the Sixties. 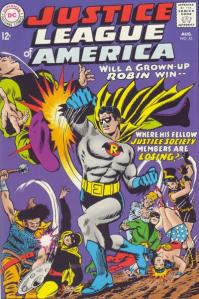 Wolfman and Perez steered Dick Grayson into his independent adult identity as Nightwing although there was a lot of whiny attention-seeking over the presence of Jason Todd, the second Robin.  As DC’s answer to Daredevil, circus acrobat Dick has been phenomenally successful with readers, even giving up his supremely logical role as the successor to Batman and his long-deserved JLA membership.

Poor Jericho, however. Many fans wanted the mute artistic Titan with the power of possession to be gay but instead he was an inveterate womaniser. As part of Deathstroke‘s dysfunctional family, Joe Wilson has gone mad and been killed off with monotonous regularity. Maybe Marv and George should have stuck to their guns and introduced their new Wildcat instead.

Dr. Light: abrasive and arrogant scientist Kimyo Hoshi gained light-powers in the middle of the Crisis on Infinite Earths  in the summer of 1985. The death of the original Supergirl inspired her to become a super-hero and she was a member of Justice League Europe.  Kimyo is emblematic of an 80s trope: female versions of male characters, like the aforementioned Wildcat, Monica Marvel or Dr. Midnight. Dr. Light was a powerful, foreign female – a big no-no in comics anyway- and also an unsympathetic personality. Added to the fact that the criminal Dr. Light has been transformed into a rapist ( and therefore has more dramatic weight, reprehensible as that is), it’s easy to see why the Japanese Dr. Light has never been able to fulfil her potential in comics. 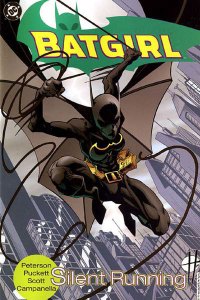 Batgirl: An elective mute,unlike Jericho, the third iteration of Batgirl is a product of the almost-ludicrously grim Gotham of the 90s.  Cassandra is an Elektra-style assassin and abuse victim.  Now renamed Blackbat, presumably in a reference to the Victorian song Come into the garden Maud: ” The black bat night is flown”. In any case, Babs will always be Batgirl to me. 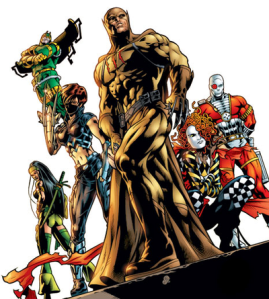 Secret Six II:  Gail Simone is responsible for this cult favourite and it’s very pleasing to see a female comics creator make such an impact.  The breakout star of this twisted surrogate family of psycho-killers  is not Deadshot or movie star Bane but hackneyed Bat-villain Catman. If I wrote Justice League, I’d induct bad boy Blake in an instant. 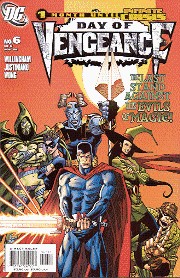 Shadowpact:  predating the current Justice League Dark, this was a Noughties team of magick-users. Nightmaster was an ultra-obscure  Sixties Sword and Sorcery hero.  Detective Chimp was a cynical but funny take on a charming Silver Age character from Infantino and the star of the book.   Ragman is, of course, Joe Kubert’s Bronze Age urban avenger.  Enchantress, Bob Haney’s “switcheroo-witcheroo” and  Nightshade, Ditko’s Charlton heroine  were both members of the Suicide Squad in the 80s. Finally, Blue Devil was a light-hearted Kirby-esque hero also from the Eighties turned,with an utter lack of imagination, into a true demon.

The most interesting thing about this group was that they made their headquarters in a supernatural bar.

The Legionnaires of July 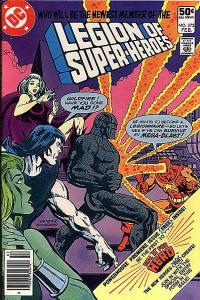 Blok: Originally a member of X-Men parody, the League of Super-Assassins, this Conway-Staton riff on Marvel’s misunderstood monsters was a member of the LSH in the 80s. The gentle, innocent Blok was assassinated by the flamboyant and murderous Roxxas in the Five Years Later version of the Legion. Although he’s alive in current continuity, unfortunately for one of the rare non-human Legionnaires, he’s been sidelined on the Sorcerers World with White (now Black) Witch. 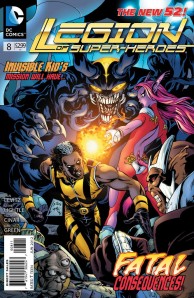 Invisible Kid II:  This Legionnaire from the Cote d’Ivoire was introduced in the Legion’s first-ever annual in 1982.  The second black Legionnaire, he served as the “noob” or audience POV character for a year or two. If future Legion creators ever decide that dead-alive- dead Invisible Kid I is back, Jacques Foccart should regain his short-lived teleportation powers. 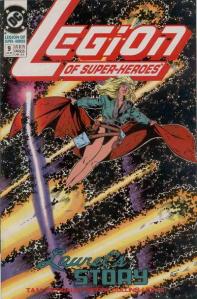 Andromeda:  the Amazonian Laurel Gand was the Legion’s answer to Power Girl. Introduced in the 5YL Legion, Laurel was a Supergirl-analogue and the cousin of Mon-El. She had a relationship and a child with Green Lantern, Rond Vidar. As is too often the case with ballsy heroines, however, Laurel was eventually killed off. The  subsequent Archie Legion version of Laurel was a xenophobic space nun. Comics! 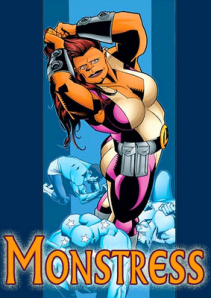 Monstress: a She-Hulk parody from the Archie Legion, introduced as one of the Amazers, with Star Boy, Kid Quantum II and the third iteration of Insect Queen. Cyndi Pyponte-LeParc III was a poor little rich girl who was murdered by an insane Element Lad in the original Legion Lost series.

Kid Quantum: Another complex one , this. The female successor to a KIA black character who was retconned into the 5YL Legion, Jazmin Cullen sounded like she might be a version of Adult Legionnaire, Quantum Queen. Instead, she had obscure  powers to stop time.

Dream Boy: Another precognitive from Naltor, sent to replace Dream Girl when she was killed off in the Threeboot Legion Era.  Unlike Nura Nal, Rol Purtha could only foretell the immediate future.