We’ve all been focused on the USA for weeks, as probably the most controversial president of my lifetime evokes criticism and protest across the digital landscape. Meanwhile, Marvel’s movie juggernaut caroms onward, unveiling the early stages of Infinity War. So, for this morning’s first post of the mid-term holidays, we’re returning to the collected adventures of Captain America from the very end of the 1960s . 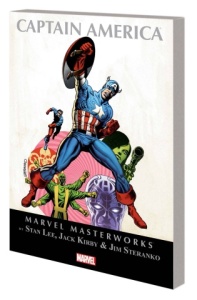 The last library volume covered the super-spy adventures of Cap and SHIELD in conflicts with AIM, the Super-Adaptoid and a resurrected Baron Zemo. Ironically, the driving forces of the series were actually Steve Rogers’ emotional relationships with two characters: his long-dead teenage sidekick Bucky and  SHIELD’s Agent 13, the courageous Sharon Carter. The past  wouldn’t stay dead as WWII villains resurfaced ( in the case of the Red Skull, quite literally, from the sea).

These tropes continue in volume 3 and  inform a series of roughly three story arcs, from May of 1968 through to May of 1969. I’ve entitled them after individual issues. As a child, I read four of these comics in their original colour format ( which I’ll use to illustrate the post) and then, in my very early teens, almost all in the b/w weeklies of the mid-70s. 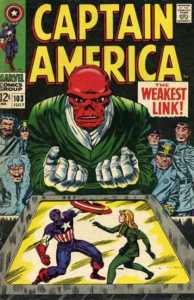 Slave of the Skull recounts  two new devilish plans from the skeletally-featured arch-fiend, both more grandiose than his previous, rather silly city-stealing scheme. First the fourth and final Sleeper, a Nazi android with powers not dissimilar to the later Infinity Man is defeated, essentially and rather cheesily, by the power of Agent 13’s love. This makes her the target of the next plan: abduction of the couple and Cap’s enslavement as the living trigger for a nuclear weapon.

In these four issues we are first introduced to the Exiles,  sci-fi stormtroopers, the inner retinue being grotesque stereotypes of Nazis, Commies and Red Chinese. The most memorable are probably the Mussolini-lookalike with the deadly scarf and the wizened Cadavus, Monarch of the Murder Chair. On their Sargasso Sea island retreat, they foreshadow the sinister cabal who serve Darkseid on the war-camp world Apokolips. The Skull’s decadent gladiatorial games are brutal and depraved, like the distorted Dickensian workhouse of Granny Goodness. The defeat of tyranny on the beach by SHIELD feels very timely ( no pun intended) and both Cap and Sharon employ Bondian gadgets and gimmicks in their adventures.

Cap Goes Wild is a sequence of five “one and done” adventures, like the final days of the Lee/Kirby Fantastic Four. Two new villains are introduced: the corpulent criminal headshrinker Dr. Faustus and an eerie LMD  duplicate of Steve. The android appears in what is, for me, one of the most memorable and quintessentially Kirby episodes- pitting Cap against not only the machinations of Mao Tse-Tung but a pair of brothers who run Infinity Studios (!). 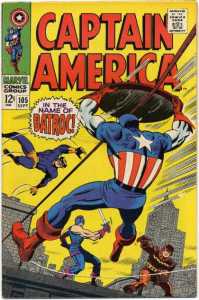 The other stories make use of established Marvel villains, including the Swordsman, the Living Laser and the Trapster. Lee and Kirby makes both Swordy and Trappy more deadly than I think I’d ever seen before ( with the erstwhile Paste-Pot Pete working as a mercenary for an off-stage Red Skull). Cap is absolutely driven through this sequence, frantic about Sharon and tormented by WW2 combat films and elaborate re-enactments of the war by his enemies. 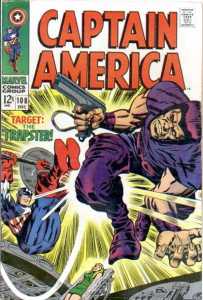 There is a temporary catharsis  with an expanded, gritty retelling of Cap’s origin ( which introduces, I think the Vita-Rays which enhance the Super-Soldier formula).  This issue acts both as a kind of epilogue and prologue for the ground-breaking work of Jim Steranko.

The Strange Death of Captain America: Steranko draws upon cinema techniques and blends them with Kirby’s sci-fi arsenal. He uses close ups, high-angle shots, shadows and double -page spreads as Steve’s inner conflict reaches a crescendo. Rick Jones is finally permitted to play the role of Bucky but more significantly, the chaste Cap series ( all yearning for the unattainable Sharon, who scarcely appears in this arc) gets the shock treatment from the perverse, dominatrix presence of Madame Hydra. The villainess’s mittel-European origins and disfigurement recall both Doctor Doom and Scarlet Witch and Steranko employs the imagery of masks and mirrors for his three central characters. 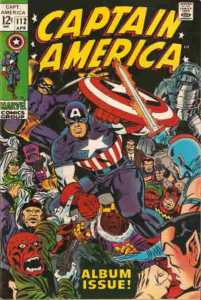 There are clear influences of Eisner and Salvador Dali in Steranko’s work. The final Kirby “album issue” is a valedictory epilogue to the Tales of Suspense Era ( and one that introduced me to so many Cap icons-: Modok, AIM, the Fourth Sleeper) but in the vein of Frank Miller’s 80s Batman, Steranko reboots the series’ status quo for the Seventies, through surrealism and expressionism. I completely loved it. 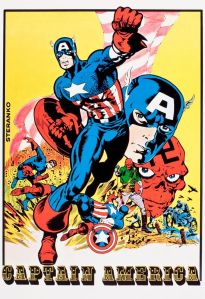 The next phase of Captain America would be memorable for another reason, as Lee and Colan introduce a new partner for Cap: the Falcon, the first Afro-American Marvel hero. Next time, however, we’ll look at two Marvel heroes who were very much products of the dyspeptic mid-70s.