Last Friday, at work, we celebrated School Sports Day which reminded me that my first experience of truanting around the  age of 12 also took place on Sports Day, forty years ago.

I was devious enough to leave the school grounds after registration and walked as far as Springfield Place off Glassford Road (about twenty minutes) in Strathaven. I had bought two comics to read, before catching the bus home: Kamandi (“The Gulliver Effect”) and Superboy/Legion (“No Price Too High/”Stay Small or Die!*) – which is where I got my first glimpse of Power Girl in a house ad. It’s interesting to note, in passing, that these comics were about a year out of date, too. Comics distribution in Scotland. Pfft.

It would be another couple of months before I read an actual issue of the revived All-Star Comics but I had guessed she was the E-2 version of Supergirl from the ad. PG was the first new JSAer since the adult Robin in the 60s and she seemed more dynamic and less feeble to me than Supergirl who’d been relegated to Superman Family and a role as a soap actress.

Considering that she was DC’s latest attempt at a liberated heroine, she’s less strident than her “cousin”, Ms. Marvel ( another Conway Creation, the following year). I was a fan of the Staton/Layton JSA stories and Paul Levitz dials down the “Femizon” angle. But  Karen Starr is still objectified, like Carol, by her revealing costume; she’s treated with suspicion and open hostility by some of the JSAers at first; and she is frequently injured or humbled. However, her later friendship with the second Huntress and her solo stories in the Showcase relaunch give PG some traction in the late 70s. 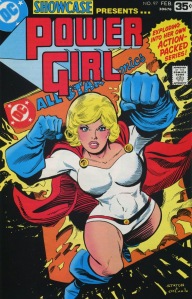 Once All-Star was cancelled in the DC Implosion, PG was a guest-star in the Huntress back-up series in Wonder Woman and regularly joined in the 80s summer JLA/JSA team-ups. She – and the Huntress- appeared in the first arc of the Thomas/ Ordway Infinity Inc. series.

But, like all the E-2 characters, Power Girl was hamstrung by  Crisis on Infinite Earths in the mid-80s.

Like some other legacy heroes- Donna Troy, Hawkman and the Legion-PG even required a new origin that severed her link with Superman, ( revamped of course in turn by John Byrne.) Now, Kara was a descendant of DC’s 80s fantasy hero, Arion. 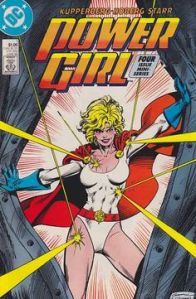 With her convoluted new magickal, Atlantean origin in place , PG was launched in her own limited series again and also became a charter member of the JLA’s  European expansion team. But this was not a great time for Kara. 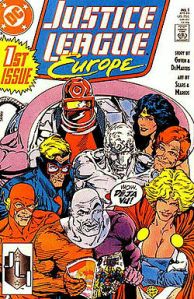 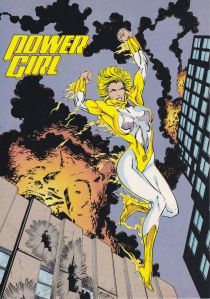 She received two makeovers in the late 80s and 90s: my preference is for the yellow bodysuit just because the headband costume is so horrible. PG also suffered the usual indignities of the era: vastly reduced powers; a tiresome sugar addiction storyline; most heinously , the awful “Alpha Child/Marcus Immortus” trope that Carol Danvers and Donna Troy endured.

By the mid-90s, Supergirl was back in an ongoing series and PG was largely irrelevant, aside from her (minor) Power Woman role in Kingdom Come. It seemed Ross and Waid saw her as another 70s curio- like Atlas or Sandman. 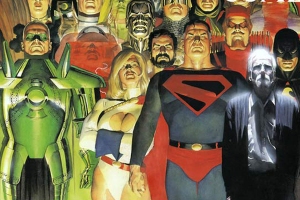 But, as we know today, DC’s history is hopelessly cyclical and the alternate Earth cosmology was restored nearly a decade later, in Infinite Crisis. PG’s origins were reset again. In 2005, she went on to “starr” in the first arc in the spin-off JSA Classified series and was featured again as a regular in 2007’s  relaunched Justice Society of America ongoing.

However, Supergirl, relaunched by Loeb and Turner, had regained her own title again and PG’s “starr” (sorry) dimmed once more, despite a very rare team -up with her alternate, in 2006’s Justice League Unlimited. 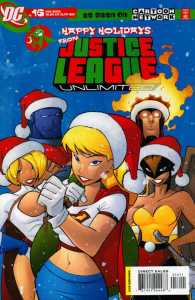 The end of the decade saw the launch of PG’s first ongoing series which ran until the debut of the New 52. Now, Kara was reunited with the Helena Wayne Huntress for Worlds’ Finest ,with a new costume by George Perez. I’m not wild about the new look but it’s better than her 90s outfits.

Of course, the New 52 has been superseded  by DC Rebirth. Worlds’ Finest ran for nearly three years but Supergirl’s back in the ascendant. Her various series have been reprinted in trade formats and she has her own tv show. Last night’s crossover with the Flash was more entertaining than Captain America: Civil War. Whither Power Girl?

If Rebirth revives the JSA, Kara should be part of that team. There’s something of the wartime Rosie the Riveter flavour to the character- the “Broad”- and she doesn’t seem to work as well in a JL or even Infinity Inc. context. But will she be Kryptonian or Atlantean? Does no one truly love a fairy when she’s forty? Time will tell.