Today’s post continues the saga of DC’s B-lister super- hero team of the 1940s, the Seven Soldiers of Victory. Last week, re-reading issues of All-Star Squadron gave the blog a rather “Roy Thomas” tone, I thought. And speaking of the man once known as “Ye Editor”, the 80s chapter of story of the Star-Spangled Kid was told in Secret Origins and Infinity Inc. 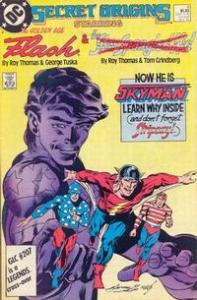 Sylvester Pemberton had funded and guided the young proteges of the JSA  as  heroes- for-hire in Hollywood. Pemberton took on a new alias as Skyman but the character was accidentally killed in the sombre final issues of the series by the anti-hero, Mr. Bones.

However, there was something of a counter-movement in the next decade away from the gloom of grim’n’ gritty, instigated by The Dark Knight Returns and Watchmen. One such title was Stars and STRIPE, which revived the Star-Spangled Kid in 1999. The new Kid was Stripesy’s step-daughter Courtney and he went into action with her in Anime-style armour.

The same year, the JSA was revived very successfully, blending some of the Infinitors with the elder statesmen  ( Justice Socialites?) The perky Courtney joined and later adopted the sobriquet “Stargirl”. We also learned in the pages of Aztek that the Crimson Avenger’s pulp hero regalia was used by the JLA in an initiation rite with an almost Masonic flavour.

Such was the book’s popularity, the JSA title ran for over eighty issues,  morphing back to  Justice Society of America for a further fifty-something. In fact, such was the potency of those three letters that Grant Morrison proposed a project called JL8, which would be his take on the Avengers…but with DC characters.

Well, that doesn’t sound terribly inspired and the proposal was radically revised to become the book-ended collection of miniseries entitled Seven Soldiers of Victory in 2006. I’ll  look at that project in more depth another time but suffice to say one series was devoted to a new version of the Shining Knight, a cross-dressing young woman named Ystina.

In the second issue of the  DC Universe: Legacies series of 2010-11, Len Wein replaced Green Arrow and Speedy with TNT and Dyna-Mite. TNT had, of course, been killed off in Roy Thomas’ Young All-Stars title of the late 80s but continuity is now such a briar patch, one should simply admire the logic and symmetry in the induction of  Weisinger’s “human hand-grenades”. The Dummy returned to menace the Seven Soldiers in this vignette.

Tex and Dan haven’t survived as Legionnaires in the New 52 DCU but Paul Cornell revived Ystina for the Demon Knights series, where the Knight identified as intersex, as part of DC’s attempts to reflect contemporary gender politics . Meanwhile, Stargirl was recruited in the pages of the the super-hero/espionage title Justice League of America; she has gone on to star also in the team’s Canadian incarnation.

This year, the “Under the Dome”-inspired Convergence event delivered a swan song of sorts for the Golden Age Soldiers in the pages of another venerable title, World’s Finest. 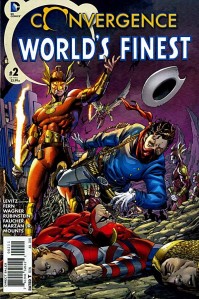 This two-parter begins  during the Red Skies phase of the Crisis.  Green Arrow, Speedy,  Stripesy, Vig and the Crimson Avenger all die in the course of the story – in fact, Pat succumbs to pneumonia and so doesn’t even merit a heroic exit. SirJustin is, ostensibly, the protagonist of this valedictory story but rather sweetly, it’s really about cartoonist Scribbly Jibbet, once a friend of Red Tornado, Ma Hunkel.

But heroes never die forever. TV appearances by Stargirl in Smallville and Law’s Legionnaires themselves in The Brave and the Bold animated series are testament to the enduring appeal of the Seven Soldiers of Victory.

All images are presumed copyright of their respective owners.

The recent Convergence event at DC comics – allegedly a placeholder while the company decamped to California- saw the temporary revival of many long-lost features and characters. One particularly caught my attention: World’s Finest starring the Seven Soldiers of Victory. Today, I’d like to discuss my fascination with DC’s second super-squad of the Fabulous Forties.

The Seven Soldiers -aka Law’s Legionnaires- were created by Mort Weisinger and Mort Meskin, following the JSA model in 1941. By which I mean, they were solo stars from anthology comics, like the JSAers. Unlike the swanky All-Stars however- the Flash, Spectre or Dr. Fate- none of the Seven Soldiers had any super-powers. Also, there were three sidekicks in the grouping ( which was actually an unofficial octet.) This group of crimebusters had some out-of-this-world adventures, however. Their time-travelling and dimension-spanning exploits mimicked some of the JSA’s cases and, I think, inspired some of the Avengers tales of the mid-Sixties.

I’m not clear why Weisinger’s Aquaman wasn’t on the team; certainly though, I’d known of him and Green Arrow for years, through the Fox/ Sekowsky Justice League giants.

The first “unknown” Soldier I encountered was “drugstore cowboy” the Vigilante, at the very beginning of the  JLA’s  satellite era and the clash with the Doomsters (Feb 1970). I have to say the motor- cycling cowpoke was hugely overshadowed by the new-look Green Arrow and the sultry Black Canary- plus that satellite teleporter system! 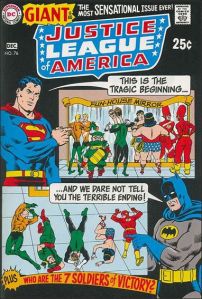 In typical Scottish style, thanks to the vagaries of easrly-70s distribution, my next encounter with the group was in the JLA Giant dated Dec 1969. The beautiful Murphy Anderson posters within introduced me to virtually all DC’s Golden Age ( or E-2) heroes- and their origins!- in one gorgeous issue.  I have the faint recollection that this was a comic bought by my dad, one Sunday afternoon, somewhere in Glasgow’s East End or South Side… but I’ll never know. 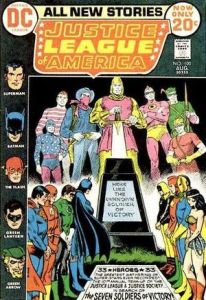 However, with this primer, I was ready for the Wein/Dillin blockbuster JLA 100 in 1972. Again, all I recall is very hazy: a dark night near Strathaven Castle and a second buy, the Kirby Klassic “Pact” issue of New Gods. I can’t tell when the hell I read both, since the former was dated August and the later February. It was most likely the autumn of 1972, in Baird’s pet food store on Kirk Street.

“The Unknown Soldier of Victory” re-introduced the forgotten heroes; recounted their first adventure with the mastermind known as the Hand; and also their untold demise in the 50s, battling the Nebula Man. Teams of JLA- and JSA-ers then travelled to different time periods to reassemble the Legionnaires, in order to undo the menace of the reinvigorated Iron Hand. In addition to all that, we saw glimpses of the Red Dragon, the Needle and the Dummy- the latter a Golden Age villain who would gain further noteriety in the 80s…

Some of the scenarios in the three-part tale ( the final installment I wouldn’t read until the Eighties) were bizarre and ludicrous to modern sensibilities -although very much in vein with the transformations of DC heroes in the Silver Age. In the conclusion, underdog android the Red Tornado re-enacted the self-sacrifice of Wing, the “unofficial” Legionnaire I alluded to earlier. Of course, in comics, no one dies forever. 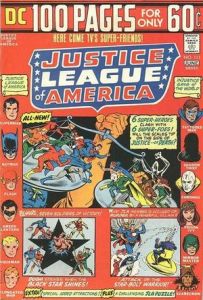 I assume the Seven Soldiers were intriguing enough to merit the reprint of their second adventure (with the sinister Black Star) in the Super-Spectacular pages of JLA 111-112 in the summer of 1974. I read the first part of that tale while staying with my tenant farmer aunt and uncle. It follows the JSA format of solo clashes with the Star’s henchmen- most memorably, the bouncing Hopper and the vemous Rattler. Again, it was nearly two decades later whenI read the conclusion- where gigantism proves the shadowy villain’s undoing.

The next appearance of Law’s Legionnaires was in the pages of Adventure Comics in 1975 as a back-up strip to the infamous (Wrath of the) Spectre series. Joe Orlando had a lost script pencilled by modern artists. I’ve only read one chapter in this fairytale adventure, with Green Arrow and Speedy and father Time. However, Legion alumnus Mike Grell pencilled a dynamic and acrobatic Crimson Avenger. I would love to see a collected version of this saga – even if it mirrors adventures in Magic-Land for the JLA and JSA.

The Vilgilante had made sporadic solo appearances in Adventure Comics earlier in the decade but like the Spectre, it’s hard to tell if this was an E-1 version. In any case, Shining Knight, the E-2 archers and the Crimson Avenger were not seen again in the DCU for a while. The Star-Spangled Kid however, was drafted into the Super-Squad  for the All-Star Comics revival of Jan 1976. 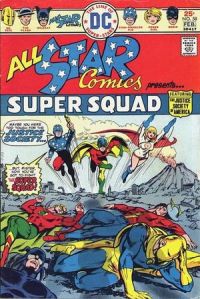 Gerry Conway, having created the short-lived Mikaal Tomas Starman ( a pastiche of the Kree Captain Marvel?) granted the Astral Avenger’s cosmic rod to the Kid. Later, the rod was incorporated into a Cosmic Converter belt; Sylvester Pemberton used the device until leaving the JSA temporarily  in 1978.

The next Soldier to leave the field of battle was the Crimson Avenger. Dying from a terminal disease, Lee Travis sacrificed himself to stop a hijacking in a Wein-penned back-up in 1981’s DC Comics Presents-  a Superman team-up title.

That same year, however, The Shining Knight played a major role in Thomas’s All-Star Squadron. I think it’s clear to see how much Sir Justin influenced the Dane Whitman Black Knight. The time-tossed gallant served with the All-Stars for a while but left to become Churchill’s bodyguard. Some years later, Thomas and Ordway retold the third Leading Comics saga. The villain was the temporal marauder Doctor Doome ( really!) who had assembled the greatest military minds of human history. It’s interesting to note that the E-2 Green Arrow and Speedy became brunette and blond respectively, in an era when their E-1 counterparts looked reasonably different anyway! 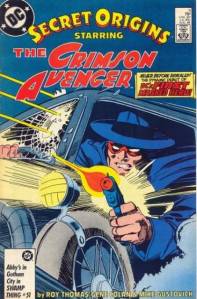 In the pages of Secret Origins, Orson Welles’ infamous war of the Worlds was woven into the,er, Shadow-y debut of the Crimson avenger in a moody saga by Thomas and Gene Colan. 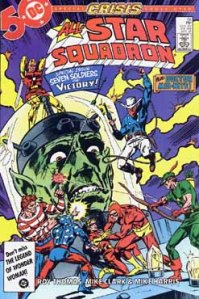 A second SSOV tale was then  twice-told in early 1986. “The Sinister Secret of the Sixth Sense” is a helter-skelter pulp thriller ( as indicated by the visual references to the Hidalgo Trading Co from Doc Savage). a wild ride featuring robots, sinister medical procedures, gunsels and an ancient idol, it has a primitive charm although the Ordway story is more elegantly pencilled.

Had the Crisis not ended Thomas’s saga of Earth-Two, we might have witnessed the retelling of the Seven Soldiers’ clashes with The Copperhead, the Dummy and the Barracuda. In the next post, we’ll look at the legacies of Law’s Legionniares from the 90s to the present.

All images presumed copyright of their respective owners