Last night, Marvel’s Agents of S.H.I.E.L.D. received its UK premier on Channel 4. Once the cutting-edge, Left-wing chatterati channel of the 80s and later, a brash, vulgarian “Yoof” channel for much of the Nineties. Now, it’s all cookery and property shows, having aged with its audience, perhaps. A strange place for a US family drama, in the high-tech espionage vein.

I seem to be in a minority, finding the first episode a sophomoric affair, with snarky high-schooler dialogue and a scattering of cutesy references to Marvel Comics, (including a wincingly precious nod to Journey Into Mystery.) The characters were one-dimensional and the wacky British pair of science nerds were especially exasperating. I don’t remember if I’ve ever expressed any interest in the Agent Coulson character but I found him quite smug here.

An unfunny, laboured US take on Torchwood, S.H.I.E.L.D. also had links with Iron Man 3, a loud, tiresome film with crass, racist imagery that seems to have generated little criticism. I may give the tv series another look next week to see if it’s less coy and wearing but it’s more “Agents of Sheesh” in my book.

One Marvel reference which appears in the final scene of the show is Coulson’s flying car, a piece of hardware that recalls the stunning psychedelic Jim Steranko era of the Sixties comic. I was exposed to two installments of the original Nick Fury series in the 60s- the first in a largely DC Double Double comic. Later, I read the whole Steranko sequence in the Super-Spider-Man/ Titans landscape UK weekly and then in mind-snapping colour in the 1976 Captain Britain Weekly.

In the last few weeks, I’ve read trade paperback reprints of the series- which morphs from Stan , Roy and John Buscema’s muscular, European spy thrillers to the sci-fi wonders of Hydra Island; the return of Nazi super-villain Baron Strucker and a cavalcade of far-out weaponry: The Satan Claw; The Aphonic Bomb: the Death Spore.

There follows a sci-fi invasion guest-starring Captain America and the Joe Maneely/Jack Kirby Oriental villain, the Yellow Claw. Steranko blends pulp fiction and Kirbyesque hardware in a dazzling Sixties take on the death -trap movie serial. The climax of the story completely wrongfoots the reader with a jaw-dropping and bizarre reveal.

The first collection ends with an apocalyptic alien invasion tale which employs that old Gerry Anderson trope “It was all a dream…or was it ?!!” The second volume continues  with a series of standalone stories, each exploring a different genre: hard-boiled noir; gothic romance; and Pop Art spy thriller. 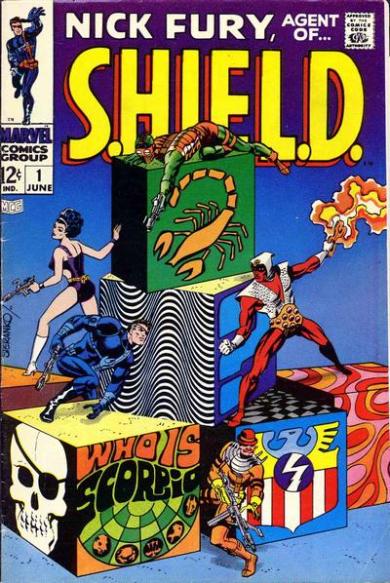 There is something of a story-arc in the motivations and origins of the super-villain, Scorpio, who seems to have cosmic-level powers and a particular grudge against Fury. When the series was cancelled, Roy Thomas and Gary Friedrich developed the Zodiac crime cartel and the mystical powers of the Zodiac Key. Possibly at once solutions more prosaic and yet spinning off whole new sagas at Marvel. 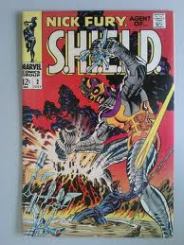 The one criticism I have of volume 2 is the Centurius story, which is a hallucinatory re-telling of the High Evolutionary saga in Thor. The mastermind has the same Noah’s Ark plan and even wears identical armour. Interestingly, Centurius returned as a cast member in Jeff Parker’s recent Dark Avengers. He’s also the third villain in the S.H.I.E.L.D. series to proclaim the mysterious “Parable of Doom”. Was Steranko building to a story arc here or did he just forget he was re-using a melodramatic phrase?  In any case, I wish Joss Whedon had channeled some of the bravura style of the visionary artist: the original Mister Miracle.

Coming soon: A Flash of Silver

All images presumed copyright of their respective owners.

As the 50th anniversary approaches, here’s another post on Dr. Who in other media. 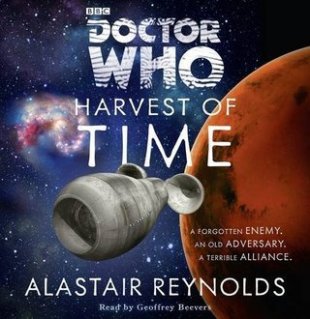 The Harvest of Time: I listened to this mammoth reading of Alastair Reynolds’ novel about six weeks ago and that took nearly three weeks in itself. At eleven hours, it’s phenomenally long.

It’s a pastiche of the Third Doctor’s era, the Jon Pertwee Years, silkily read by Geoffrey Beevers. UNIT investigates a mystery on an oil platform that involves the Master and an invasion by miniature seahorse-like aliens called the Sild. I assume Reynolds is unaware that these are also canned fish, readily available in supermarkets…

The story ranges from Scotland to an almost-unimaginably-distant future and the threat of a device called the Infinite Cocoon. There is also a surprising cameo appearance from the John Simm Mister Master.  While pretty predictable, It’s quite a jolly listen, evoking the Target novels of Malcolm Hulke. Comfort food for the ears but very time-consuming. 4/5 Talmars

Sleepers in the Dust: Unusally for AudioGo, this is a first- person story, narrated by Arthur Darville as Rory Williams-Pond. It’s a pure sci-fi story by Darren Jones, a semi-sequel to his Eye of the Jungle. Alien rodent people are attacked by giant microbes in an undemanding timey-wimey adventure.  (3/5)

Next, three more entries in the Destiny of the Doctor audio series: Shadow of Death is a ponderous Second Doctor story. Frazer Hines gives his customary sprightly reading and faultless Troughton impersonation. Zoe effectively vanishes from the narrative, about a human outpost orbiting a pulsar. It doesn’t  feel authentically Sixties and is a bit of a chore. (2/5)

Trouble in Paradise also feels a little too long, although it’s mildly entertaining. There is some humour as Peri encounters a smug and preening Columbus but the bovine aliens and their backstory seem too similar to The Daemons. (3/5) 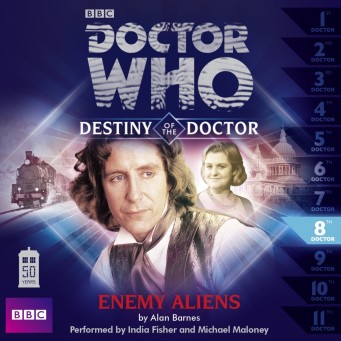 Enemy Aliens is far better. It’s a cheeky parody of The Thirty-Nine Steps with Big Finish’s  Charley Pollard and the Eight Doctor. With what feels like a shorter running time, it features witty, sometimes naughty gags (including one that refers to Panic by The Smiths) and it’s fun to hear the David Arnold theme again. (5/5) 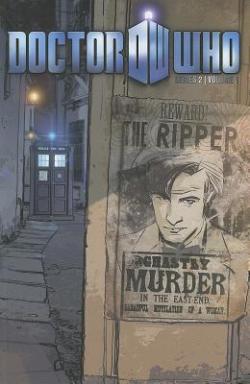 IDW’s US comic series featuring Matt Smith’s Eleventh Doctor is now collected in trade paperback. Volume 1 ,The Ripper features a timey-wimey parody of From Hell in which Saucy Jack’s murders are committed by alien dinosaurs. Will Amelia “Marple” become Jack’s next victim in Whitechapel? This moody Gothic is accompanied by a witty one-off about the Tardis  being spammed with junk email. (4/5)

I found Vol 2 ,When Worlds Collide,  slightly less rewarding with a lengthy adventure set on a vacation planet. It’s a Westworld parody, with a troop of Sontarans and a comedy robot dinosaur. There is also a charming football standalone about Anglo-Saxons and Danes at Wembley . (3/5).

These strips are an engaging alternative to the monthly DWM strip and far better than the company’s previous series with the Tenth Doctor.

I still have a review to write of a 1975 Superman 100-pager but frankly, I found it such a stodgy and dull read,  I can’t get round to it.  Instead, I wanted to talk about a different comics marketing strategy from the 70s.

This was a completely random find on Google Images this week: 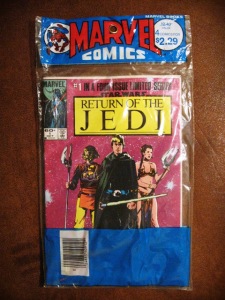 It was a rush, seeing that packaging again after so many years- although the contents hail from a far later period than I associate with the branding. And we had three comics per pack, not four.

We had a family holiday in Morecambe, Lancs.  in the summer of 1978. I remember finding a newsagent in the town which sold these triple-packs and the contents were already two years old by that point.  Over the course of the week, my brother and I must’ve bought four of the “grab-bags”; I don’t know what they cost at the time, but I’m assuming it was around a quid. 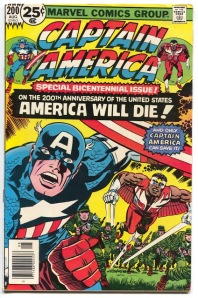 Chronologically, the first pack dated from August 1976 and contained Dr. Strange 17, a heady occult brew from Englehart and Colan, too sophisticated for my tastes then; Kirby’s Eternals 2, the second issue of his Ancient Astronauts epic and Cap & the Falcon 200: the Bicentennial climax of the Madbomb storyline .  I would have preferred the Englehart Nomad sequence at that age but it’s amusing to see how dated his stories seem now and how Kirby’s oddball world has been strip-mined latterly. 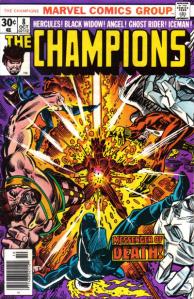 The next two packs contained comics from October ’76: Power Man 36, with a snoozer about alchemist-villain Chemistro; Ka-Zar 18, an unappealing Moench/Mayerik sci-fantasy adventure with flying sharks and a comedy relief Hobbit named Zartros; and an ugly issue of the Champions as they faced off against Marvel’s Soviet supervillains. 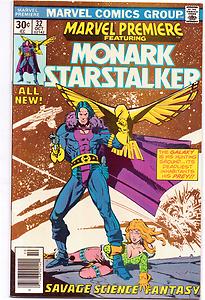 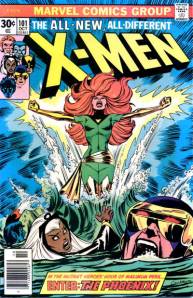 Best of all was X-Men 101, the debut of wimpy Jean Grey’s sensusous Phoenix identity. In those almost-unimaginable days, the sole X-Men title was bi-monthly and no issues had appeared in my area for about a year. The fact that the story was largely a lead-in to an Oirish romp with the Juggernaut barely registered, such was my excitement.

A fourth pack contained a triptych of Marvels from November ’76 .Avengers 153: a Conway/John Buscema production from the rather fallow period between the Headshop Kozmic of Englehart and the angsty Shooter era.  I was very interested in a line-up comprising the Beast and the Golden Age Whizzer at that time. 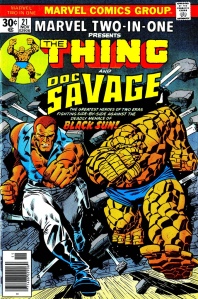 MTIO: a knockabout adventure for Ben Grimm and the Man of Bronze. The generic cosmic villain Blacksun ( so Seventies) would go on to play a major role in the well-remembered “Project Pegasus” storyline. 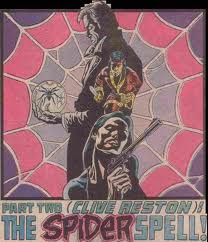 Finally, Master of Kung-Fu 46, “The Spider Spell” was a moody, cinematic episode from the Moench/Gulacy Magnum Opus and an eample of the House of Ideas at its creative peak in the Bronze Age.

The one thing these comics all appear to have in common is that they were published in months where they weren’t distributed in the UK- or at least in my area- for whatever reason. The great attraction, of course, was the random nature of the contents. You could end up with something you’d already read or owned because the bags were sealed and only the top copy was visible. But that also meant you could find an unexpected gem. 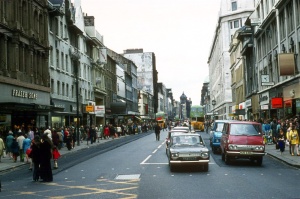 Next time, I’ll be looking at the contents of more grab-bags: this time from the spinner rack in Lewis’s on Argyle Street,  circa 1979, when these packages were on their way out.

All images presumed copyright of their respective owner